IoT is creating new opportunities and providing a competitive advantage for businesses in current and new markets. It touches everythingâ€”not just the data, but how, when, where and why you collect it. The technologies that have created the Internet of Things arenâ€™t changing the internet only, but rather change the things connected to the internetâ€”the devices and gateways on the edge of the network that are now able to request a service or start an action without human intervention at many levels.

Because the generation and analysis of data is so essential to the IoT, consideration must be given to protecting data throughout its life cycle. Managing information at all levels is complex because data will flow across many administrative boundaries with different policies and intents.

Given the various technological and physical components that truly make up an IoT ecosystem, it is good to consider the IoT as a system-of-systems. The architecting of these systems that provide business value to organizations will often be a complex undertaking, as enterprise architects work to design integrated solutions that include edge devices, applications, transports, protocols, and analytics capabilities that make up a fully functioning IoT system. This complexity introduces challenges to keeping the IoT secure, and ensuring that a particular instance of the IoT cannot be used as a jumping off point to attack other enterprise information technology (IT) systems.

International Data Corporation (IDC) estimates that 90% of organizations that implement the IoT will suffer an IoT-based breach of back-end IT systems by the year 2017.

Regardless of the role your business has within the Internet of Things ecosystemâ€” device manufacturer, solution provider, cloud provider, systems integrator, or service providerâ€”you need to know how to get the greatest benefit from this new technology that offers such highly diverse and rapidly changing opportunities.

Handling the enormous volume of existing and projected data is daunting. Managing the inevitable complexities of connecting to a seemingly unlimited list of devices is complicated. And the goal of turning the deluge of data into valuable actions seems impossible because of the many challenges. The existing security technologies will play a role in mitigating IoT risks but they are not enough. The goal is to get data securely to the right place, at the right time, in the right format; itâ€™s easier said than done for many reasons.

Dealing with the challenges and threats

Gartner predicted that more than 20% of businesses will deploy security solutions for protecting their IoT devices and services by 2017, IoT devices and services will expand the surface area for cyber-attacks on businesses, by turning physical objects that used to be offline into online assets communicating with enterprise networks. Businesses will have to respond by broadening the scope of their security strategy to include these new online devices.

Businesses will have to tailor security to each IoT deployment according to the unique capabilities of the devices involved and the risks associated with the networks connected to those devices. BI Intelligence expects spending on solutions to secure IoT devices and systems to increase five fold over the next four years.

Developing solutions for the Internet of Things requires unprecedented collaboration, coordination, and connectivity for each piece in the system, and throughout the system as a whole. All devices must work together and be integrated with all other devices, and all devices must communicate and interact seamlessly with connected systems and infrastructures in a secure way. Itâ€™s possible, but it can be expensive, time consuming, and difficult, unless new line of thinking and new approach to IoT security emerged away from the current centralized model. 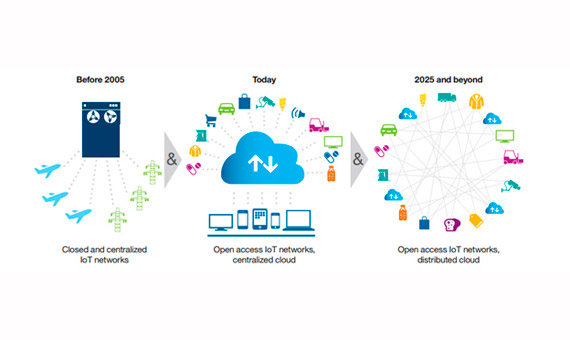 The problem with the current centralized model

The current IoT ecosystems rely on centralized, brokered communication models, otherwise known as the server/client paradigm. All devices are identified, authenticated and connected through cloud servers that sport huge processing and storage capacities. Connection between devices will have to exclusively go through the internet, even if they happen to be a few feet apart.

While this model has connected generic computing devices for decades, and will continue to support small-scale IoT networks as we see them today, it will not be able to respond to the growing needs of the huge IoT ecosystems of tomorrow.

Existing IoT solutions are expensive because of the high infrastructure and maintenance cost associated with centralized clouds, large server farms and networking equipment. The sheer amount of communications that will have to be handled when IoT devices grow to the tens of billions will increase those costs substantially.

Even if the unprecedented economical and engineering challenges are overcome, cloud servers will remain a bottleneck and point of failure that can disrupt the entire network. This is especially important as more critical tasks

Moreover, the diversity of ownership between devices and their supporting cloud infrastructure makes machine-to-machine (M2M) communications difficult. Thereâ€™s no single platform that connects all devices and no guarantee that cloud services offered by different manufacturers are interoperable and compatible.

A decentralized approach to IoT networking would solve many of the questions above. Adopting a standardized peer-to-peer communication model to process the hundreds of billions of transactions between devices will significantly reduce the costs associated with installing and maintaining large centralized data centers and will distribute computation and storage needs across the billions of devices that form IoT networks. This will prevent failure in any single node in a network from bringing the entire network to a halting collapse.

However, establishing peer-to-peer communications will present its own set of challenges, chief among them the issue of security. And as we all know, IoT security is much more than just about protecting sensitive data. The proposed solution will have to maintain privacy and security in huge IoT networks and offer some form of validation and consensus for transactions to prevent spoofing and theft.

To perform the functions of traditional IoT solutions without a centralized control, any decentralized approach must support three foundational functions: 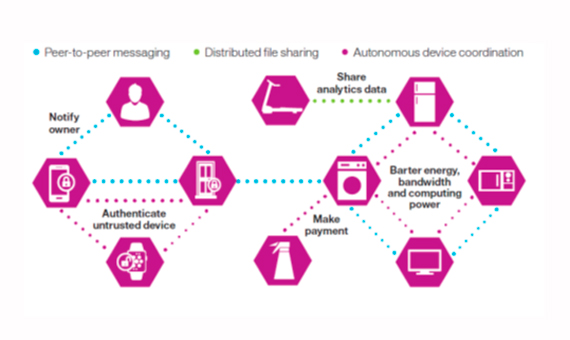 Blockchain, the â€œdistributed ledgerâ€ technology that underpins bitcoin, has emerged as an object of intense interest in the tech industry and beyond. Blockchain technology offers a way of recording transactions or any digital interaction in a way that is designed to be secure, transparent, highly resistant to outages, auditable, and efficient; as such, it carries the possibility of disrupting industries and enabling new business models. The technology is young and changing very rapidly; widespread commercialization is still a few years off. Nonetheless, to avoid disruptive surprises or missed opportunities, strategists, planners, and decision makers across industries and business functions should pay heed now and begin to investigate applications of the technology.

Blockchain is a database that maintains a continuously growing set of data records. It is distributed in nature, meaning that there is no master computer holding the entire chain. Rather, the participating nodes have a copy of the chain. Itâ€™s also ever-growing â€” data records are only added to the chain.

A blockchain consists of two types of elements:

What are some advantages of Blockchain?

The big advantage of blockchain is that itâ€™s public. Everyone participating can see the blocks and the transactions stored in them. This doesnâ€™t mean everyone can see the actual content of your transaction, however; thatâ€™s protected by your private key.

A blockchain is decentralized, so there is no single authority that can approve the transactions or set specific rules to have transactions accepted. That means thereâ€™s a huge amount of trust involved since all the participants in the network have to reach a consensus to accept transactions.

Most importantly, itâ€™s secure. The database can only be extended and previous records cannot be changed (at least, thereâ€™s a very high cost if someone wants to alter previous records).

How does it work?

A set of approved transactions are then bundled in a block, which gets sent to all the nodes in the network. They in turn validate the new block. Each successive block contains a hash, which is a unique fingerprint, of the previous block.

There are two main types of Blockchain:

The Blockchain and IoT

Blockchain technology is the missing link to settle scalability, privacy, and reliability concerns in the Internet of Things. Blockchain technologies could perhaps be the silver bullet needed by the IoT industry. Blockchain technology can be used in tracking billions of connected devices, enable the processing of transactions and coordination between devices; allow for significant savings to IoT industry manufacturers. This decentralized approach would eliminate single points of failure, creating a more resilient ecosystem for devices to run on.

The ledger is tamper-proof and cannot be manipulated by malicious actors because it doesnâ€™t exist in any single location, and man-in-the-middle attacks cannot be staged because there is no single thread of communication that can be intercepted. Blockchain makes trustless, peer-to-peer messaging possible and has already proven its worth in the world of financial services through cryptocurrencies such as Bitcoin, providing guaranteed peer-to-peer payment services without the need for third-party brokers.

The decentralized, autonomous, and trustless capabilities of the blockchain make it an ideal component to become a foundational element of IoT solutions. It is not a surprise that enterprise IoT technologies have quickly become one of the early adopters of blockchain technologies. 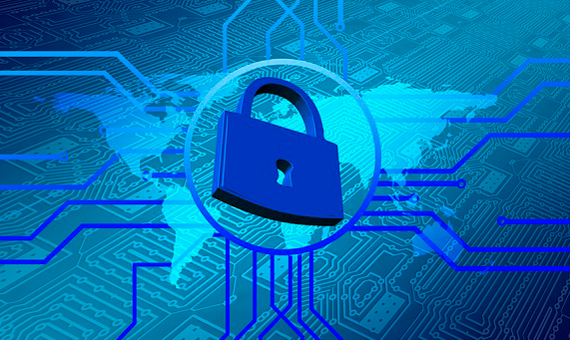 In an IoT network, the blockchain can keep an immutable record of the history of smart devices. This feature enables the autonomous functioning of smart devices without the need for centralized authority. As a result, the blockchain opens the door to a series of IoT scenarios that were remarkably difficult, or even impossible to implement without it.

By leveraging the blockchain, IoT solutions can enable secure, trustless messaging between devices in an IoT network. In this model, the blockchain will treat message exchanges between devices similar to financial transactions in a bitcoin network. To enable message exchanges, devices will leverage smart contracts which then model the agreement between the two parties.

In this scenario, we can sensor from afar, communicating directly with the irrigation system in order to control the flow of water based on conditions detected on the crops. Similarly, smart devices in an oil platform can exchange data to adjust functioning based on weather conditions.

Using the blockchain will enable true autonomous smart devices that can exchange data, or even execute financial transactions, without the need of a centralized broker. This type of autonomy is possible because the nodes in the blockchain network will verify the validity of the transaction without relying on a centralized authority.

In this scenario, we can envision smart devices in a manufacturing plant that can place orders for repairing some of its parts without the need of human or centralized intervention. Similarly, smart vehicles in a truck fleet will be able to provide a complete report of the most important parts needing replacement after arriving at a workshop.

One of the most exciting capabilities of the blockchain is the ability to maintain a duly decentralized, trusted ledger of all transactions occurring in a network. This capability is essential to enable the many compliance and regulatory requirements of industrial IoT applications without the need to rely on a centralized model.