In 1886, the German physicist Heinrich Hertz first demonstrated the existence of radio waves, which in honor of him are also called Hertzian waves. His purpose was to test the electromagnetic theory proposed a couple of decades earlier by James Clerk Maxwell. The curious thing is that when his students asked him what the applications might be of his discovery, he replied: â€œItâ€™s of no use whatsoever.â€ Hertz deserved a ten as a scientist, but a zero as a futurist. Today his waves are ubiquitous, and not just in our communications â€“ we even use them to heat food.

But after more than a century, this is about to change. Today, humanity seems inclined to take a jump in the electromagnetic spectrum to another strip that has traditionally been used for little more than illuminating us. Visible light is formed by waves of the same type as radio, but of a different size and frequency. And for many researchers, the rainbow really does hide a treasure, that of the communications of the future.

In fact, the use of light for communication is not a new idea. The first attempts date back to the epoch of Hertz himself. In 1880, the American Alexander Graham Bell, one of the pioneers of the telephone, experimented with the photo-phone, a wireless system operating with modulated light. In the nineteenth century, what triumphed in Europe and North America was the optical telegraph, a network of signposts and telescopes that allowed, for example, a short message to be sent from Amsterdam to Venice in an hour. Nowadays, fiber optics is an essential part of our communications, but it has been in the twenty-first century that we have seen the revival of wireless optical communication and, more specifically, visible light communication (VLC). 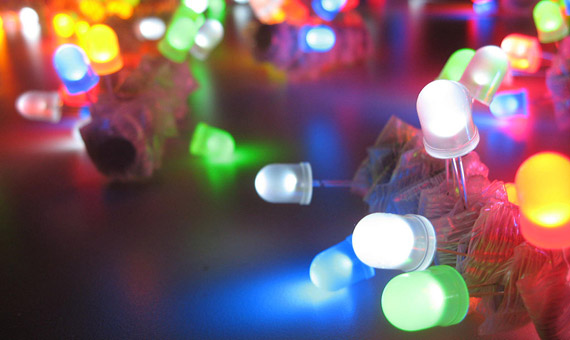 The development of LED technology has made possible the Li-Fi communications/ Credits: Graffiti Research Lab

The application of VLC now on everyoneâ€™s lips is Li-Fi, a term coined in 2011 by British engineer Harald Haas to facilitate understanding of what is a version of Wi-Fi that works by light. The concept could not be easier: light on is one, light off is zero, which permits any digital file to be coded and sent by light signals. The development of light-emitting diodes, or LEDs, has allowed us to have appropriate transmitters. According to what Haas said in 2011, the infrastructure already exists; we just need to add a microchip to LEDs to convert them into Li-Fi transmitters. As for the reception of the signal, the photodiodes present in digital cameras and smartphones would work just fine.

There are several advantages to Li-Fi. First, there is speed; the rapid flashing of the LED, imperceptible to the eye, permits speeds of theoretical transmission in the order of gigabits per second (Gbps), between 100 and 1,000 times faster than current Wi-Fi, which operates in the range of megabits per second. Some practical applications in the real world have reached 1 Gbps, but there is still much room for improvement; the speed of 224 Gbps in bidirectional communication has already been reached in the lab. 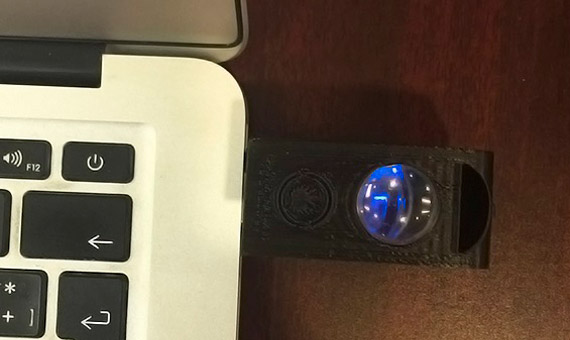 According to the authors of this study, led by Ariel Gomez of the University of Oxford, â€œoptical fiber communication networks can provide terabit aggregate capacities to buildings and offices within modern cities. Practical wireless systems are orders of magnitude below this capacity.â€ In other words, the high speeds of the facilities run into a bottleneck at the end by the limitations of Wi-Fi. This problem could be eliminated by the use of Li-Fi.

In addition, visible light avoids the issue of the progressive saturation of the radio spectrum, a problem for modern communications. The wide bandwidth available in the visible light band means that, contrary to what happens with radio waves, different transmissions of Li-Fi can coexist in the same space without interference.

Of course, there is a limitation. Although the sender and receiver are not required to be in direct visible contact â€“it has proven to work well with reflected lightâ€“, the range is short and, therefore, â€œinterior applications are easier than exterior ones,â€ says Ana GarcÃ­a-Armada, the director of the Department of Signal Theory and Communications at Carlos III University of Madrid (Spain), to OpenMind. Of course, the fact that light does not pass through a closed door becomes another advantage: it is impossible to hack Li-Fi at a distance. 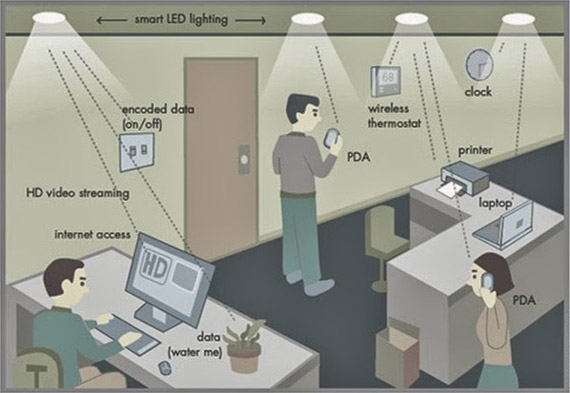 Because of its short range, â€œits domestic use is immediate,â€ says Garcia-Armada. But this engineer runs a project specifically aimed at outdoor use, using LED streetlights as sources of Li-Fi signals that the user would be able to receive on their smartphone. The obstacles to overcome are mainly two; on the one hand, there is the â€œinterference from other light sources and particularly the sun,â€ says Garcia-Armada. On the other hand, â€œthe coverage of large areas requires a network design with various interconnected nodes and the possibility that the user will connect to the point that provides the best signal at all times,â€ says the engineer.

Therefore, the experts tend to predict that Li-Fi wonâ€™t dethrone Wi-Fi any time soon, but both would coexist for different uses and in different environments. However, in the meantime, Li-Fi can pave the way to new applications. According to officials of the British project Ultra-Parallel Visible Light Communications (UP-VLC), Li-Fi will enable the large-scale implementation of the so-called Internet of things, which will network various machines of everyday use, such as refrigerators and the smartphone. Garcia-Armada suggests that LED car headlights may be used for multimedia communications.

The UP-VLC project works on reducing the size of LEDs to achieve a panel of one million microLEDs per square millimeter and with a flicker rate 1,000 times faster than current ones. The result will be speeds in the range of terabits per second through screens that will allow them to simultaneously display information, light up a room and provide Li-Fi connection. Perhaps at the moment the imagination is moving ahead faster than the technology, but we are just at the beginning. As Haas said in 2011 when he introduced Li-Fi in public, â€œin the future we will not only have 14 billion light bulbs, we may have 14 billion Li-Fiâ€™s deployed worldwide.â€